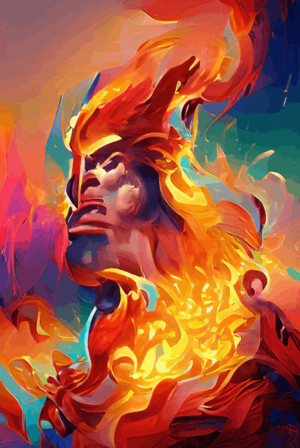 AllSeeing FireMountain is a High demigod and the current de jure leader of the powerful FireMountain clan, ruling over the Silver Plains.

Although his age is not as advanced as it seems, he gives the impression of being old and tired. His fire does not burn as bright as it did in his younger days. Some believe this rapid aging is due to the ongoing conflict to his once-enemy and quasi-benefactor, Lady Cross FireMountain.

The fate of AllSeeing as the formal leader of the FireMountain clan is in question, due to the poor performance of the Silver Plains in the War of the Bottomless Debt. The remaining forces of AllSeeing are scarce and his army is demoralized. However, they can count on the support of the locally powerful Trumpet Soothsayers in any internal struggle against Lady Cross. This is due to the Trumpeteer's ongoing vendetta for the incidents known as the Puppet Show Wars.

It is currently unknown if at the end of the day AllSeeing will side completely with the Trumpeteers, or rather if he will shield Lady Cross (the former leader) from them in exchange for a respite in the internal struggle for the control of the clan. AllSeing, despite his tarnished public image, is a shrewd negotiator when it comes to preserving his own status, and his intentions other than that are very hard to read. A select number of wizened shamans have even called this a proof of his mastery of the Way of Smoke and Mirrors, an ancient and respected technique in the Silver Plains traditions.

People not familiarized with Deirian culture tend to assume AllSeeing is a descriptor. It is not; it is just a name. AllSeeing FireMountain is not Omniscient; in fact, he isn't even sophont in the ascended consciousness meaning of the term - much as he isn't a literal Fire Mountain.

Regardless, some still call him AllSong FireMountain, alleging that is his real, hidden name (probably hidden by the Way of Smoke and Mirrors). This name makes a reference to a bird's song, and as such his opponents insist that "he has no feathers to show after his song".

Retrieved from "https://yourcreatures.miraheze.org/w/index.php?title=AllSeeing_FireMountain&oldid=11957"
Categories:
Hidden category:
Cookies help us deliver our services. By using our services, you agree to our use of cookies.