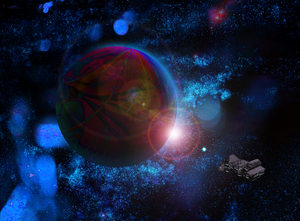 The Aurciorosphlaunosos Planet is inhabited by a strange beings known as ɔɧŭηûɐɧŭ. They are very sympathetic and unruly. They have a reptile appearance and their sizes and colors vary in each individual. "The one who medidate about rainbows" takes care of all of them and is the one who can comunicate with them.

Their customs are not known despite the fact that the ɔɧŭηûɐɧŭ gave a huge encyclopedia to the Dussians written in the ɔɧŭηûɐɧŭ language (although in the North Melodic Dussian script). Despite this, the Dyzldi (a kind of Dussian), were not able to decipher it.

The work "ʇն ɧ∂ƺûɐɧŭℓʇηʇƺƺɧʇƺɧŭն ʇɧŭƺүɧ" (as the meaning remains unknown the title are the three first words) was handled to the Sercque, that begun its translation. They have, however, refused repeated times to share their findings.

Luckily, the Dussian photographies of the ɔɧŭηûɐɧŭ in their natural enviroment remain:

Retrieved from "https://yourcreatures.miraheze.org/w/index.php?title=Aurciorosphlaunosos_Planet&oldid=11880"
Categories:
Hidden categories:
Cookies help us deliver our services. By using our services, you agree to our use of cookies.