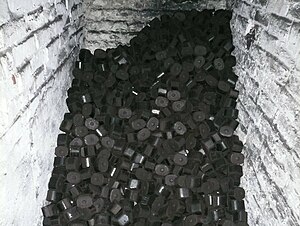 Coal, usually sold as briquettes and ground into a fine dust, is essential to many sorceries that produce fire.

Reagent theory is a field of study pertaining to the necessity of reagents in Magic. It attempts to classify the required ingredients for various kinds of spells and sorceries, quantify the required amounts for each, and attempts to understand the relationship between reagent consumption and the Skeleton of the World.

The earliest, general formulation of R theory is as follows:

This formulation is a primitive synonym of Moldenteft's Law, which is the name by which the Dwaerkar academia largely refer to this foundational principle of magic. The law derives its name from Professor Emeritus Ruud Moldenteft, a scholar at the Grand Library, who first acquired sufficient evidence to validate the Principle of Equivalency, as it was formerly known.

The Principle of Expenditure describes the amount of a certain type or class of reagent that is required to assure that a specific potency of a spell can be attained. c

Reagents will be expended p much

RD theory states that, in determining a spell's effectiveness, the distance of the reagent will be affected by the Distance factor, given by the following equation:

where k is the RD distance coefficient, x is the distance between the catalyst and the reagent in Dwaerkar units, and a is the a-coefficient as value in the open interval <math>a \in (0, \infty)</math>.

The RD distance coefficient has an experimental value of approximately <math> \pi/12</math>. The a-coefficient varies in accordance with the skill of the spellcaster, for which reason it shows great variance. Average values range from 6-10, while the most-skilled spellcasters have been found with a-coefficients as high as 92.

Through unknown means, some have been able to push further than any known or measured a-coefficients. An explanation of this phenomenon is the Telelocation postulate, as detailed below.

The Telelocation postulate attempts to explain why certain mages of immense power are able to telelocate their reagents without having to carry them. This means they can effectively draw power from reagents stored in a convenient place, perhaps back home. This frees a mage of physically carrying the required reagents, and offers some convenience -- one of the rarest resources of Borost.

The Telelocation postulate goes as follows:

Retrieved from "https://yourcreatures.miraheze.org/w/index.php?title=Borost:Reagent_theory&oldid=3667"
Categories:
Cookies help us deliver our services. By using our services, you agree to our use of cookies.