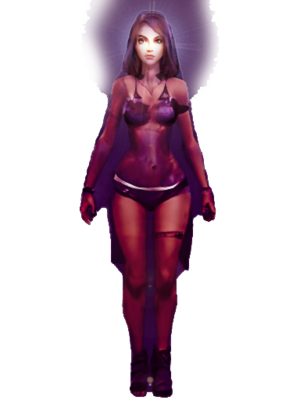 A Shiningface known as Sandy Heidy-Steinem, demonstrating its misguided beliefs about human physical perfection in order to gain followers. Many guises are possible, but attractiveness and youth are the most common features, as well as an unnatural "face glow", as if constantly illuminated by a frontal direct light.

Cults of Impersonators is an informal designation for the many quasi-religious and sectarian groupings in Illoria that worship Shiningfaces, hypnotic creatures in the employ of the Gold Ones.

As the great majority of the Gods of Illoria grew weaker and more distant, in particular after the destructive Wars of the Fifth Heaven, the peoples of the world looked for new images to worship. Gods were no longer enough; humans had discovered they were as good as gods, capable of shaping reality and transforming the world though both technology and their fears and desires.

Since Gods were suppossedly so far away that a human could never aspire to become one, and so alien to us that their minds and motivations could not be known, this contributed to their slow, and then rapid, decline.

Shiningfaces discovered that they were now not limited to play as regular humans. Humans believed in themselves so much, they believed humans could be like Gods. As such, Shiningfaces -shapeshifters- could imitate openly the greatests qualities of beauty, class, elegance, and attitude. While before this would have drawn envy and hatred, in the modern il-Human society, it drew mostly adoration - to the point of worship.

Groups of followers were the obsessive attendants of the Shiningfaces, believing them aspirational models to the maximum potential of humanit y - not realizing their true, synthetic nature. The Shiningfaces, in turn, took advantage of this blind worship, demanding all kinds of favors from their fanatics.

In the original times or as an anomaly, when merely following the whims of the Shiningfaces, the Cults of Impersonators were little but provokers of chaos (see Zachos). This would not last, though. Eventually, the Gold Ones, being of immense antiquety linked to ancient idols and countless riches and power, would realize they had something to offer to the Shiningfaces - and something to get in return.

As the Gold Ones has access to nameless treasures, they would be able to hire -and promote- the Shiningfaces, promising to grow their Cult in return to just doing them little "favors" - favors such as promoting their messages, and access to the cult's members. After all, an Impersonator could easily alter the mind of a fanatic, making the fans the midless pawn of a mindless pawn.

This scheme was a sucess, and through select Impersonators, the Gold Ones gained access -and control- over huge swaths of the population, leading thus even to the divergence of a new, distinct Il-Earth, known as the Il-Earth ID.

Though when the Cult of Impersonators were young, humans certainly must have believed they were quite natural, such an excuse appears to not apply today. Many exposés have been published that detail how Impersonators aren't real humans of flesh and blood, but rather distorted falsifications feeding on otheractive beliefs - being hooked on a feedback loop with this phenomenon prevalent in the Illorian polyplane, much as Gods had been more prominently before. However, no matter how much of this information leaked into the access of the masses, most continued to believe in Shiningfaces, despite, or even because they are fake.

Having a figure of perfection is believed to constitue some kind of escaping, an anchor in a desperate and changing world (in particular after the Great Redemption devastated much of the ancient outlook of Illoria). Worshippers are desperate for something to cling into, and Shiningfaces offer exactly that: A relationship with enough distance to not break the illusion of idealization, but also just enough closeness to provide the feeling of communion with their idol - who at least "appears" to be just flesh and bones, superficially "Human" just as their followers, but just perfect in all the ways that matter. A prototype of what "everyone would want to be like", a (literally) shining beacon of perfection and security in an imperfect and insecure world.

"Who cares if its perfection is an illusion or an effect? He is real when I look at Him", said interviewee Fawny Hobsbawn about her Shiningface idol, Manuel Rodriguez, known for his musical modelling cult.

Retrieved from "https://yourcreatures.miraheze.org/w/index.php?title=Cult_of_Impersonators&oldid=7933"
Categories:
Hidden category:
Cookies help us deliver our services. By using our services, you agree to our use of cookies.