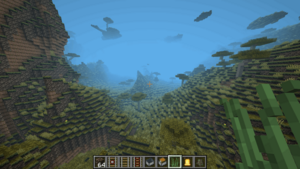 A screenshot of the "my destiny" dimension with AMPLIFIED generation. Note that a partial unofficial texturepack is in use.

my destiny is the codename for a randomized dimension in Version 20w14infinite of Minecraft.

No hostile mobs normally. No night. There are small ranching villages with all stuff, including villagers, farms, iron golems, and cats. Villagers I found had their trades unassinged even tho there were job sites.

Some villager homes start out with beds. As with all these worlds, sleeping for a player is not possible however. Beds still can be placed.

There are lava lakes deep underground, near the bedrock, but no ores. No sun or moon or day and night, just a perpetual bluish fog (which apparently remains sperical in Infinite snapshot).

Apparently, on dark caves, zombies and zombie villagers *can* generate. Skeletons and creepers can spawn in underground ravines. No spiders have been sighted.

Retrieved from "https://yourcreatures.miraheze.org/w/index.php?title=Games:Dimension_my_destiny_(minecraft_20w14infinite)&oldid=11887"
Categories:
Hidden categories:
Cookies help us deliver our services. By using our services, you agree to our use of cookies.