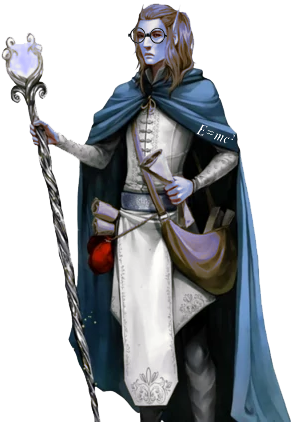 A dork elf librarian, the most favored profession amongst dork elves.

Dork Elves (Nuu'shulanth, both singular and plural) are a subspecies of High Elves, made from those that long ago were touched by the Essence of Alyvas, making them desire to compulsively hoard and study obscure trivia.

Dork Elves are of blue and purple hues, with gray, white or black hair, which has highlights similar to their skin color. They are taller than humans in average and of slight build.

Even though Dork Elves are tall and slender, they are not graceful. They tend to constantly trip over stuff (even their own feet), leading them to be in uncomfortable situations, ruin their clothes, stain their parchments and spill their drink and food. Furthermore, the long hours which dork elves spend reading, writing and building miniatures in dim light ruins their eyesight. Sight that they direly need for these activities, so it is not uncommon for them to use eyeglasses (which fall frequently victim to their aforementioned missteps).

The Nuu'shulanth don't visibly age after maturity in a very noticeable way to other species, yet they become more shut-in and erratic. Eventually their time comes and they show their hundreds of years of life all at once, becoming instantly little more than bone and dust upon death.[n 1]

All Dork Elves tend to have special and particular interests of their own. One may be obsessed with knowing every bit of trivia of the stars of Sigma Prime sector, from their apparent and relative magnitudes to their orbital period around the galaxu. Another may be more interested in knowing everything about the types of sandgrains in the Rainbow Desert, from their prismatic properties to their special taste. Yet anotherone may memorize information about the path of generally ignored trade routes in eleventh-century ruprossian history.[n 2]

Nuu'shulanth are natural collectors, and it is not rare for them to have huge collections of their area of interest, be it dissecated plants, crystal coyote teeth or archaeological artifacts from the Period of Ruin in Molas Sonctuarus. The thing they share in common is never giving any practical use to these collections - they are to be enlarged and admired, never utilized.

Some Dork Elves are adept with technology, which they use to further their particular interests. In some cases, areas of technical knowledge becomes their main interest, giving birth to rare and eccentric prodigies. Yet, this is one of the few areas of interest in which they may be contracted by other races to perform active, practical duties. The level of knowledge of Dork Elves in their particular areas is unmatched by any other species, so their expertise is sought in the event that area has any practical application at all.

Most Dork Elves are reclusive, preferring the safety of their homes to the "cruel and dangerous" outside. They generally communicate via quasi-magical innate abilities that resonate with their scepter devices, which project hologram-like images.

Dork Elf homes are mostly subterranean, though their exits go to the surface (they don't connect in the underground with other Nuu'shulanth dwellings). When they go out, they use protective shield bubbles. The surface of Nuu'shulanth "towns" are gardens tended by servant Gnomes, and a few spires that serve as museums, libraries and colleges.
The choice of couple for Dork Elves is simple: Find the person that most closely shares your interests. Moving together is rare so generally only one parent raises each child.

Rarely, Nuu'shulanth form a sort of small living arrangement, with a series of apartments shared by a group of similar interests. Cohabiting is difficult, but also rewarding for those that find someone with which to discuss their own obsession and that seems to understand, and to a degree share, it. Complexes made of a diversity of these small communities seemingly float above gardens, accessible by crystal stairs.

Servant gnomes normally feed and clothe the Dork Elves according to their demands, being indentured by generations, inherited, and generally treated like (non-tradeable) property, but also sort of paternal figures. As the Nuu'shulanth are naturally magical, generally the threat of a spell is enough to keep the gnomes in check. These are called "House Gnomes" though actually, they live in their own homes in the surface, and not within the subterranean dwellings of the Nu'shulanth themselves. Open conflict with the House Gnomes is scarce, but tensions are common. Individual House Gnomes supposedly earn their retirement after 250 years of service and should be free to go into the world, yet some serve their masters for far longer, specially in the case their "protegees" haven't achieved financial independence or acquired crucial life skills such as getting out of bed in time for an appointed job, or washing their own teeth. Either from a sense of failure or by insistance and refusal from their masters, this tends to extend the service period of House Gnomes decades beyond the expiry date of their ancestral covenant, with discussions and complaints being commonplace, specially during the last centuries as the situation has worsened.

However, those Dork Elves that require to trade to fulfill their interests do generally need to learn a profitable skill, to sell their services to other dork elves, or, more frequently, to High Elves, humans and dwarves. Their preferred fields are engineering, technician, architecture, design, and aesthetics. Even though they are considered "insufferable pricks" (sic) as Gnord Gundarsson, the Bey of Knavar Bay famously declared, other species hardly can compete with their dedication to the job they perform and attention to even the most minute detail.

Whereas contracts with outsiders tend to be the most lucrative, these also stimulate the internal Dork Elf economy. A paradigmatic case was when Lerun Shebas the Fourth, Prince of the Goblins of Anthill, comissioned an ambar golem from the golemancer Aukynos. He in turn contracted the ambar expert Lydinta from Old Argive to help him craft the luxurious request. As eventually the Goblin Prince never ended up paying the full price (plus some overcharges), the delivered Ambar Golem activated remotely a secret meltdown enchantment put in by the thermomancer Hunapy II, thus denying the morose prince of his prize in the bargain.

Seldom do Dork Elves massively gather, but when they do, it's a Convention. A Convention is when and where Dork Elves exchange information about their particular passion amongst people from their own kind that come from far and wide to display their interests. Dork Elves are divided into Covenants of like-minded individuals and groups with vaguely compatible interests. For example, some that exist are the Covenant of Animals (for the wildlife-interested), the Covenant of Stones (for the geologically inclined), and the Covenant of the Past (for history aficionados). Each Covenant has a Code for their own Conventions, and Keepers that maintain the basic magical structure and paperwork so that it can function smoothly (in the surface, at the very least).

At the end of the Convention, which can last for days, weeks or sometimes even months, the Nu'shulanth take up the tedious task of finding common ground to govern the affairs of their race. Only the most administratively inclined or obstinately opinionated are the ones that remain to fulfill this thankless task, but they do so with absolute conviction - and contentiousness. The byzantine debates over the slightest of deviations from code would seem grim and pointless, if not for the fact that many Dork Elves seem to enjoy them. In between conventions, the designated volunteer Keepers of the Codes ensure everything is up to standard - a position of power, but also of great responsibility. Keepers can always be removed or re-confirmed at the next Convention of their Covenant, so they have an incentive to at least make it seem like they do a selfless job, even while they are -more or less openly- indulging in their own manias by doing subtle corrections, abrogations and reinterpretations of the Code when they apply it.

Dork Elves are disinclined to do battle, and loathe the rigors and lack of comfort characteristic of war. They would rather move to a new garden-town, which are normally camouflaged, rather than meet their enemy in combat. There are a few Dork Elves that practice combat, but always in the form of obscure arts and not disciplined wartime training. However, towns frequently prepare defensive spells and traps on the land, and make it known it is well defended to deter invaders; House Gnomes sometimes assist in this effort, although they don't fight themselves either; at most, they would defend individually their household and/or the burrow of their master. In case combat with the enemy is inevitable, Nu'shulanth rely on constructs, golems and the operation of long-range siege machinery. Most often, however, these are developed for and sold to other species. It is rare for any mainstream outside force to very interested in attacking the Dork Elves since they are valuable and often willing suppliers, for the right prices. Indeed, some Nu'shulant relish the intellectual intricacies of war and combat as board exercises, or the construction of fortresses and war machines as blueprint challenges. Such individuals and groups can become able, if idiosyncratic, contractors to outside forces. Forces eager to provide battlefields in which these Dork Elves are able to "test" -normally at quite a safe distance- their talents.

Notes are as fictional as the article's contents.

Retrieved from "https://yourcreatures.miraheze.org/w/index.php?title=Dork_Elves&oldid=11843"
Categories:
Hidden categories:
Cookies help us deliver our services. By using our services, you agree to our use of cookies.