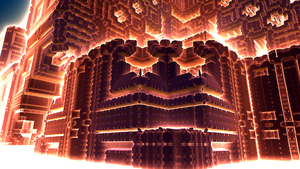 The Great Dyssian Library (in dyssian: nnn’’uwalr Xhharanp) is a building of the Dyssians at Nuthyusj, capital of Dyss. It inspired the later General Dussian Library, which used many different species to make various recordings. Some say that its architectural style is also the forerunner of that of the University of Açäwsthew. Like this library, Xhharanp specializes in collecting information from other cultures, with a strong emphasis on document translation from other languages. It is said that in its time it was the largest library (not exotic or computerized) dedicated to this type of documents among all the Dussian species and one of the largest existing libraries in the entire Plane of Kuürna, also having dozens of thousands of books dedicated to the analysis of the multiple societies known to the Dyssians.

Unlike the General Dussian Library, in the Great Dyssian Library all work is done by Dyssians. The Dyssians prefer to keep the position of Dyss a secret and no intelligent species other than the Dyssians (and some Dussians) have trodden Dyss. As very few Dyssians leave their Star System (and when they do, they barely relate to other species, unless they are Kdieua) Dyssians had to take advantage of their advanced knowledge in robotics, sending hundreds of thousands of robots to other planets or planes to collect the information for them.

The Dyssian robots are of many different types: from dussioids [r 1] up to very high quality recording capacity microbots. The variety of sources of the Dyssians is very large, from interviews, collaboration between research centers selected many light-years from each other, financing educational institutions, etc. Most translators are not Dyssians, but of the same species that wrote each book.

This approach is very useful for Dyssians because it saves them from having to make the journey to these planets themselves or translate these books, although there are always a small percentage of scholars who teach the rudiments of dyssian through robots.

When they encounter obstacles or dangerous races that do not want to share their knowledge (just as the Nhel and Sercque do to follow their mission) they have to solve it by resorting to secret recordings. These ultra-miniaturized robots are capable of attaching to any surface and traveling as stowaways in spacecraft. They then transmit their recordings with great precision through the Interplanar Fabric).

References allude to an article's relationship to "real life".

Retrieved from "https://yourcreatures.miraheze.org/w/index.php?title=Great_Dyssian_Library&oldid=6780"
Categories:
Cookies help us deliver our services. By using our services, you agree to our use of cookies.