No to be confused with the Imperial Guard (Astra Militarum) 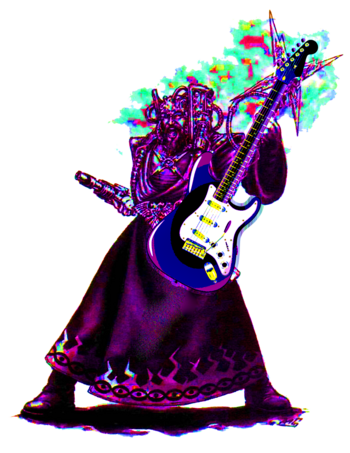 The Imperial Bards (Astra Bardorum in High Gothic) are a division of the Imperium of Man tasked with keeping the stories of Imperial Heroes (including the Primarchs and the Emperor of Mankind) alive orally amongst the population.

Originally it was thought that divisions of the Administratum or the Imperial Cult were most suitable for keeping the stories of imperial heroes and their feats alive. However, several problems arose with this: First, the Administratum was massively incompetent overburdened and very preoccupied with their day-to-day tasks in running the Imperium smoothly. On the other hand, their style was dry and nonchalant, making the stories of imperial heroes unsuitable to rise morale in the front troops and Hive Worlds, due to some absurd pretense of "historical accuracy".

So, after seeing how utterly irrelevant the dusty stories were becoming in the grubby hands of the Asministratum, the task was transferred to the Imperial Cult, along with most records in paper form; however, in careful scrutiny, they considered many of the feats of the Heroes of the Imperium, and stories featuring the alleged deeds of the Emperor himself, heretical (most specially His atheism and antitheism). The versions had to be completely "sanitized", thus depriving them of most epical flavour, funny moments, threat of treachery, and compromising circumstances. The original versions were delivered to the Inquisition for "disposal". They were destroyed in a furnace, then nuked by an ecclesiarchal Titan's tactical atomic cannons for good measure (at a "safe" distance, that is). Furthermore, the resulting radiactive ashes were collected and dumped in a [Death World] pending [exterminatus]. This Death World was Marabunta IV.

What the Inquisition didn't take into account is that Psykers from a stranded Guardsmen regiment (the 420240) were still able to read the stories from these "holy ashes", reconstructing in their minds the events that once were recorded. What is more, since this was due the emotional footprint of humanity in the Warp, the stories were "enhanced" with many details, including the distortions and embellishments bestowed upon them in every retelling. The psykers were positively shocked by the discoveries, so much so that they began telling everyone about their fortitous readings; as well as the rich stories that permeate the Imperium and Mankind. Originally, Comissars were distrustful of these stories, but their reserves ceased when they saw how the exaggerated retellings uplifted the morale of the men to never before seen heights. In fact, a single encampment which had stayed up to late at night hearing the stories of the Perpetual Guardsmen(while their lasguns charged in the bonfire) was attacked by a pack of tricornius raptors, which would have normally been fatal. Instead, the guardsmen and women fought the Raptors hand to hand, inspired by the stories, and beat them without a single discharge. All survived, except for bookworm conscript Grimmer Keptic. He had been complaining that "the story of the Emperor being Napoleon doesn't make any sense, since we know Napoleon died at an advanced age and the Emprah is ageless and biologically immortal..." and that "the Eternal Guardsmen is a bunch of shit propaganda to make us feel relevant while we are left to die at a crapsack planet". The raptors caught him off guard and tore at his face (that his comrades decided not to help might have had something to do). He was given a traitor's funeral and put by the unit's Comissar as an example of what not to think in the line of duty.

Years later the regiment was evacuated, and the Psykers of the 420240 were made an exceptional example of bravado and efficacy. The exterminatus never came since the fleet tasked to it was recalled from that segmentum in order to deal with a nearby Ork incursion. The 420240, once shipped off participated with exceptional valor in the coming battles. Some eyewitnesses from Hive World Aires murmured having even less fear of death than Orks themselves, reportedly shouting how they were just rolling stones and wanted to live forever as they charged the positions of the greenskins with bayonets, and recklessly pelted the xenos with rubble when out of ammunition, leaving even local Comissars doumbfounded.

This caught the eyes of the High Lords of Terra. The psykers and some of their closest followers had grown the hair long, painted their nails, wore armor in brilliant colors, and had other exccentricities making for a series of aesthetic deviations. This along with the psy-use of musical instruments raised some eyebrows, but they were deemed exceptionally loyal and not at all worshippers of Slaanesh, but deeply attuned with the Fabulous aspect of the God-Emperor.

Considering the failure of the Ecclesiarchy to make imperial stories exciting and engaging in a positive way, Terra decided to organize the telling of these oral embellished stories from the psykers themselves. They even decided to provide them with a steady supply of recruits so they could "contagiate" their enthusiasm and methods to them. This was a resounding success and millions of people often gathered on the metropolis to hear the touring "Bard Concertos" of the Bard Bands. Particularly engaging Psykers were awarded with Hero of the Imperium status themselves, such as when the touring band Imperiallica increased metal output in the Theros XI colony by 133,7% through the two whole weeks around their performances, visualized and heard with giant screens, holoprojectors and psyspeakers across the planet. It was clear the new method worked, and so the Imperial Bards were born, responding to nobody but to Terra (and even then, only rarely), fueled by a continuos but very positive psy-madness, directly in contact psychically with the most flamboyant emanations of the God-Emperor Himself.

There were so far only minor incidents that could put the division into question. The most infamous is happened perhaps when a psyband called the Beatings took an anti-war and pro-xenos stance. The rumors were unconfirmed at first, though their concerts continued whipping crowds into frenzies, but now there was sabotage and labor disturbances instead of patriotism and productivity increase. It was even rumored that they were in contact with T'au xeno "Ethereals" who had indoctrinated into "The Greater Good", making them believe in such harmful nonsense such as "mutual understanding" and "freedom of consciousness". After being on the run for several months in their jumpship and then in the undercities of Hiveworld Usaria, finally they were caught by the authorities. Even the severest Arbites were reluctant to take on such high profile figures and mighty psykers that could shake the feelings of a world with their concerts, so the very Inquisition had to take cards in the matter. When arrested they told the Inquisitors that they coudn't be taken away since they were now "Bigger than the Emprah". This sealed their fate and the very next day the mates of Jonnicus Lennicus faced the firing squad along with their closest groupies, an execution-lesson that was transmitted live to all nearby worlds. Jonnicus himself briefly escaped using his amazing Pskyker powers, but was later hunted down when attempting to leave the planet. The kill was claimed by a highly trained Culexus assassin, who didn't give him any further chance to compromise Imperial worlds.

The bands of the Astra Bardorum have their own embedded Guardsmen who obey their commands. They double as bodyguards and elite strike teams when the bands are deployed into enemy territory to raise the morale of regular regiments. These Guardsmen, unlike the normal ones, much as the Bards themselves are highly paid and enjoy a somewhat higher living standard than the average Imperial citizen, though they must remain anonymous and face-covered. Much as the Bards, they are in risk from corrupting influences, amongst which are counted Substance abuse, warp forces, and access to Xeno artifacts. This puts the Imperial Bards in the sights of both orthodox and radical Inquisitors, the latter wanting to use the bands as a sort of bio-weapon to psychically infiltrate Chaos.

Probably Noise Marines in Chaos Space Marines are the most flavorful option, but, if you want to keep in the explicitely loyalist side, they can also be emulated with a custom Imperial Guardsmen regiment that makes heavy use of Psykers and Walkers.

The paint jobs can be as you like, and that's part of the charm. Take inspiration from real band rock and metal bands from Kiss to Pet Shop Boys. The sky is the limit (or not).

Retrieved from "https://yourcreatures.miraheze.org/w/index.php?title=Imperial_Bards&oldid=6778"
Categories:
Cookies help us deliver our services. By using our services, you agree to our use of cookies.