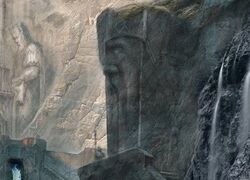 The likeness of Kel is a dominant motif in the architecture of the Dwaerkar.

The Kelian picture is a term in Dwaerkar academia to define the belief that the ultimate goal and purpose of life is the imitation and service of Kel.

Many in scientific and theological circles believe that the Kelian picture and the Kuuldent dictum are incompatible, and are fundamentally at odds.

Defenders of the Kelian picture include many notable theologians, the likes of Professor Dalt Luuge and Professor Borost:Moras Gleckstett.

Retrieved from "https://yourcreatures.miraheze.org/w/index.php?title=Kelian_picture&oldid=9939"
Categories:
Cookies help us deliver our services. By using our services, you agree to our use of cookies.