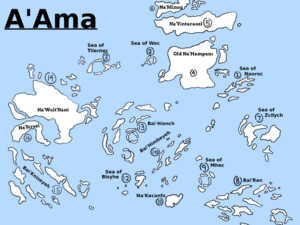 Old Na'Hampana and its neighboring lands. Sea of Nanroc at the east and Sea of Wec at the west.

Old Na'Hampana is the continent that the Empire borrows its name from, it was the people of Na'Hampana who conquered or absorbed the rest of the land into their empire, the geographic region also covers several atolls and islands.

The Provinces of Na'Hampana have a long history of infighting, the provinces were once kingdoms, territories controlled by warlords, and tyrants and a few democratic republics on the east coast. It has seen two empires come and go before the House unified them once again: the first conquered only half of the continent and the next, marched across the whole of the land.

The people of Na'Hampana recognize the gods of the others, but not every province worships every single Sivin, Gnisiter for example is the only province were Moi'Namtagga'Sholit is worshipped in any great capacity, while his shrines are found elsewhere. Only Gnisiter builds temples to him.

Retrieved from "https://yourcreatures.miraheze.org/w/index.php?title=Old_Na-Hampana&oldid=11907"
Categories:
Cookies help us deliver our services. By using our services, you agree to our use of cookies.