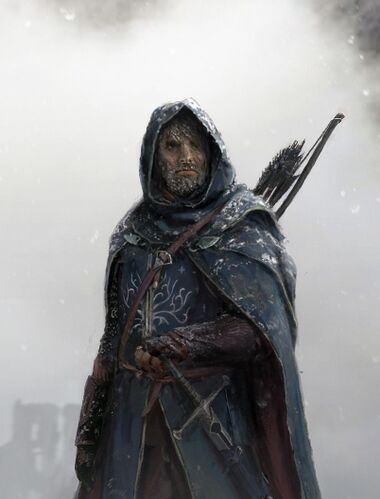 Raime of Allsellen, born Raime of Balluart, and known as Raime the Rebel, Raime the Traitor, and many other names, is the current leader of the Rangers.

Born to the prestigious Balluart family, Raime was abducted and taken into captivity by the Allsellen family as part of a feud. With time, Raime abandoned ties with his former family, and became a full adoptive member of the Allsellen family. Raime joined the Rangers and eventually became one of their captains. When Head Ranger Borost:Gereon of Aultrefois was killed in a showdown in Bahyrst, the Rangers elected Raime as his successor.

Raime of Allsellen was born Raime of Balluart, a scion of the important Borost:Balluart family, in +492. At the age of 2, the Borost:Allsellen family attacked the manor of the Balluart family. The blood-feud between these families, caused by reasons now forgotten, offered the casus belli behind this offensive effort. During the staging of the attack, a young Raime was kidnapped by the Allsellens.

When he came of age, at 15, as per the customs of Mankind, Raime elected the Allsellen family as his own. This caused the Balluarts to deem him a Traitor, for which reason many of Mankind know Raime as Raime the Traitor.

Retrieved from "https://yourcreatures.miraheze.org/w/index.php?title=Raime_of_Allsellen&oldid=10308"
Categories:
Cookies help us deliver our services. By using our services, you agree to our use of cookies.